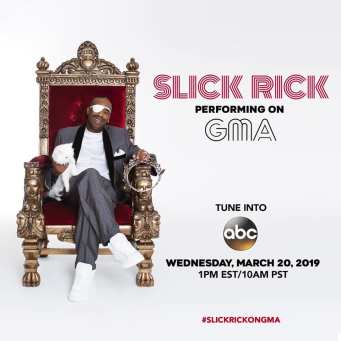 By Sherlene Shanklin, The411 on WHAS11/ABC Louisville

Make sure you DVR Strahan and Sara on Wednesday, March 20th. Hip-hop pioneer Slick Rick will be on the show.  You know that I’m always looking for a connection to the Bluegrass state and of course you know I found one! When you see Slick Rick performing I want to draw your attention to the man on the turntables.  That’s Louisville native and Dwight “DJ Kaos” Chatman.  He’s been Rick’s DJ for many years.  Kaos has been all over the world with this legend of hip hop.

I have been in contact with ABC and they confirm the performance on the show.  I asked,  “is the artist releasing new music?”  He’s actually celebrating the re-release of his debut album The Great Adventures of Slick Rick some 30 years later.  The album was originally released on November 1, 1988.  Still known today as one of the best rap albums by Source Magazine.  In 2008, VH1 ranked the single “Children’s Story” a part of their 100 Greatest Songs of Hip Hop.

The album consisted of 12 songs, 49 minutes in length.  You may remember some of the songs on this album.  “Children’s Story”, “Teenage Love” and “Hey Young World”.   The album was produced by some of the biggest names in hip hop.  Jason Mizell better known as Jam Master Jay, Hank Shocklee, Ricky Walters and Rick Rubin.

So, tune in to see Slick Rick and DJ Kaos on Wednesday at 1:00 pm (EST) right here on WHAS11/ABC.  I’ve attached the promotional photo ABC and Slick Rick is using to promote the appearance.