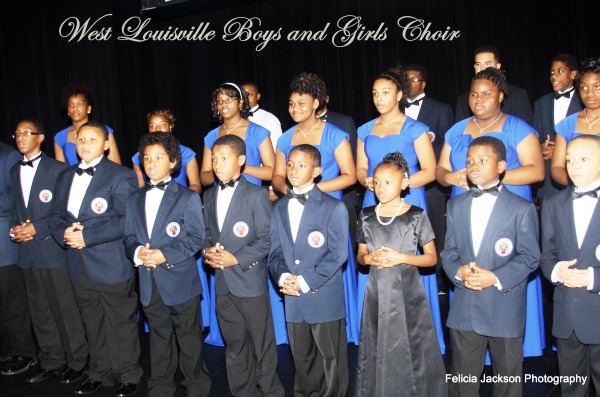 This year’s McDaniel Bluitt Hope Award recipient is Kentucky Senator for 33rd District Gerald A. Neal.  “He works tirelessly in the community.  Many see him on television but the things you don’t see that got the attention of my organization.  Sen. Neal has made several visits to talk to members of both choirs.  He was candid with them and helped them understand what it takes to be a leader in the community.  His knowledge was invaluable and he demonstrates all the characteristics to be this year’s honoree,” says McDaniel Bluitt, Boys Choir Director.

Senator Neal did highlight his honor but the accomplishments of the choirs by saying “I congratulate the students and leadership of the West Louisville Performing Arts Academy, members of the West Louisville Boys and Girls Choir for their dedication, educational obtainment, and for making a difference in the world. It is through the pursuit of excellence that they plan, prepare, and ultimately perform at a high level.”

We invite you to come out and support the youth but one of our greatest community leaders Sen. Neal.  Tickets for the 18th Annual Hope Awards are $100 for adults and $50 for students.  They can be purchased at 323 West Broadway, Artspace, 4th floor.  For more information, please contact McDaniel Bluitt at 502-376-7840

Members of the Boys & Girls Choirs rehearse twice a week, Mondays and Wednesdays, from 4:30-6:30 p.m. The WLPAA is more than just singing.  They offer college scholarships, After School Tutorials, private Acoustic Guitar lessons and performance opportunities locally and statewide.

If you would like to set up an interview with Bluitt, Founder/Director of the West Louisville Performing Arts Academy and/or Sen. Gerald Neal contact us at info@vippcommunications.com

For additional information go to http://www.westlouisvilleperformingarts.org.

West Louisville Boys Choir began in November 1990. The choir is directed by McDaniel Bluitt, a retired vocal music teacher with twenty-nine (29) years of experience. He received his B. M. ED. from the University of Louisville School Of Music and a Masters in Counseling from Western Kentucky University. The Boys Choir has performed throughout the commonwealth, for mayors, governors other national dignitaries. The Boys Choir’s first European Tour established international prominence in Paris, France and London, England. They received a superior rating during their first international music competition in the Bahamas. They were also awarded first place in the Music Festival at Sea.

The West Louisville Girls Choir made its debut in November 2002. The choir is directed by Mrs. Mamie Bluitt who received her B.M.ED. from the University of Louisville School of Music. The Girls Choir is also a performing choir.   Some of its more notable performances are: Governor Patton’s Martin Luther King, Jr. Celebration in Frankfort, Kentucky, ECHO, Women for Women Conference and at Cincinnati’s National Underground Railroad Freedom Center. Their first Southwestern Tour to Texas was held in 2010.