With the new stereo sound, you will see a new logo and station tagline, but the roots of the station remain intact but with a broader appeal from news and information but filling a void in the community when it comes to soul music. The format will give listeners an opportunity to go back down memory lane with music from Earth, Wind & Fire, O’Jays, Stylistics, Prince, Stevie Wonder, Mary J. Blige, Sade, Isley Brothers, Anita Baker plus many more.

“The Original Soul of Louisville” adds Archie Dale as the General Manager and Mark Gunn as Program Director and Afternoon Drive On-Air Personality to the already dynamic team of Krystal “Miss Krystal” Goodner in the Morning Drive and others to be announced.

With 70 years on the airwaves, WLOU is one of the oldest urban stations in the U.S. So, when it was acquired by David B. Smith Sr., long time radio personality, program director and co-owner of Kentuckiana Broadcast Group he wanted to make sure its rich history was celebrated but also be a voice for African Americans. Gunn says “We’re reaching the underserved adult Black demographic by going a lot deeper musically than the other Gold based stations in the market. In addition to REAL Soul Music, WLOU continues to deal with the soul of Louisville by directly addressing social issues we are facing today and to be an information hub to our listeners not only on the air, in the community but on our social platforms.

Smith’s love for radio has been a constant especially in Louisville and Southern Indiana so when he heard that the station maybe acquired from someone outside the region he says “Passing up the opportunity to purchase such a legendary station was not an option. The possibility of WLOU being owned by anyone not from here just wouldn’t be right”. “I’m honored to walk in the footsteps of former owner The Reverend Dr. William E. Summers III”.

With more than 30 years in the radio industry, Smith says they are not deleting the Gospel programming but moving it to our sister station, AM 1240, WLLV.

The tradition of excellence and service to the Black Community was brought to the forefront by legendary on–air personalities like “Super Neal” O’Ray, Brenda “20th Century Fox” Banks, Bill Price and Tony Fields to name a few with The Reverend Doctor William E. Summers III leading the charge.

VIPP Communications is a full service public relations, event management and production firm headquartered in Louisville, KY with clients and/or projects all over the U.S. We can create, maintain and sustain your brand.  Our clientele range from small businesses, non-profits, corporate leaders, entertainment to current and retired professional athletes.  Contact one of our team members to see if we can assist you at info at vippcommunications dot com.  www.vippcommunications.com 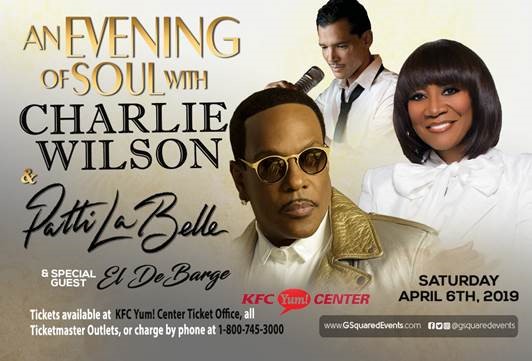 Spring into love with an Evening of Soul with R & B superstars Charlie Wilson and Patti LaBelle along with special guest El DeBarge.

The trio will perform at the KFC Yum! Center on Saturday, April 6th. Doors open at 6:00 pm and the concert will begin at 7:00 pm.

The last time, I attended a concert of Wilson his stage performance was second to none. The high energy show moved with dancers and a band for over 50 minutes.

You would expect to pay a lot of money to see these artists are definitely getting a deal with it only costing you between $42 and $125 dollars.

The VIPP Report: The Midnight train from Georgia will make a story in Louisville.  The Empress of Soul, Gladys Knight will be in concert at the Louisville Palace on Friday, September 12th at 8:00 p.m.
The seven-time Grammy Award winner got her start in the church performing gospel music at the age of four. She along with her brother, sister and two cousins, in 1959 The Pips were born. In 1962, the group was renamed Gladys Knight & The Pips. Now, you can see Knight starring in the syndicated sitcom, “The First Family” where she plays the mother of the President. Her film credits include “I Can Do Bad All By Myself”.
Tickets for Gladys Knight starts at $39.99. You can purchase them at the Louisville Palace Theatre Box Office and ticketmaster.com.If you have a story idea send it to TheVIPPReport@vippcommunications.com.  You can also follow us on @VIPPComm.

The VIPP Report:  In a raw interview with Louisville native Ben “Digital Black” Bush of Playa he opens up to Sherlene Shanklin of WHAS11 and owner of the The VIPP Report about Stephan “Static Major” Garrett.  Bush talks about the call he received from Static’s wife six years ago today.

Below is a link for your review.  If you have a story idea send it to TheVIPPReport@vippcommunications.com.  You can also follow us on Twitter @VIPPComm.  You can follow Sherlene Shanklin at @Sherlenemediapr.